In a troubling picture, American women are looking at a rockier road to
secure retirement than their male counterparts. 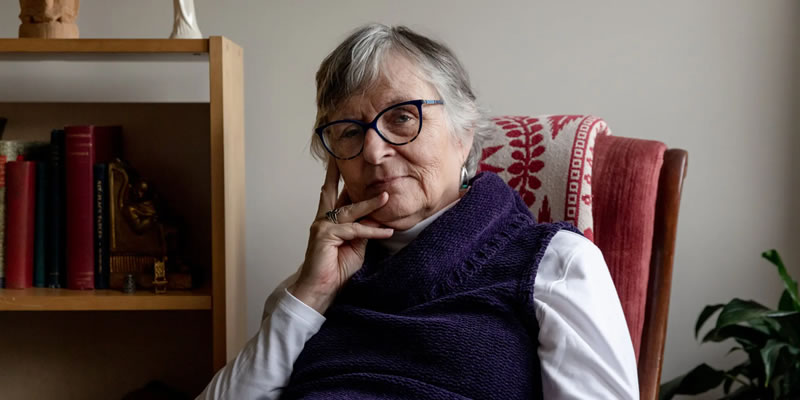 “I’m holding on,” said Susan Hartt of New Haven, Conn.,
whose modest home in Hamden was foreclosed on three years ago.
Yehyun Kim for The New York Times

Susan Hartt describes herself as an incorrigible optimist, drawn to change and challenge. After a long, successful career in marketing and public relations, she had reason to feel financially confident in her older years.

But three years ago, a bank foreclosed on her modest house in Hamden, Conn. “I don’t think I’ve ever been as anxious in my life,” she recalled.

Ms. Hartt, 79, had encountered a combination of adversities. After a late-life divorce she called “amicable and equitable,” she had no retirement plan; it had seemed unnecessary because her husband had a “substantial” 401(k). Successive jobs had grown less lucrative, and her freelance work dried up during the recession.

Soon, temporarily living in an apartment owned by friends, she was selling off possessions — a collection of stained-glass lamps, first-edition books, her piano — partly to downsize, but also to raise money.

A recent AARP survey found that almost 30 percent of women over age 65 reported feeling very or somewhat worried about their current financial situations (compared with 20 percent of men that age).

Despite gains in education, employment and earnings in recent decades, American women still face a rockier road to secure retirement than men. Yet they live longer and are more apt to encounter illness, disability and the eventual need for expensive long-term care. It’s a troubling picture.

“Women are considerably more likely to experience poverty in retirement than men,” said Richard Johnson, an economist at the Urban Institute in Washington, D.C.

In 2020, according to Dr. Johnson’s analysis, 10 percent of women over 65 lived in poverty, compared with 8 percent of men, with far higher rates for women who were older, of color or unmarried. The poverty rate for unmarried Black women over 65, for instance, topped 20 percent.

Even women who don’t sink below the federal poverty line — $12,413 last year for a one-person household — face economic precariousness. A quarter of working women over 55 are at risk of being among the working poor, defined as those who earn below two-thirds of the median hourly wage, or $15.29 an hour last year. Only 15 percent of men fell into that category, according to researchers at The New School in New York.

Small wonder that a quarter of women over 65 consider an unexpected $1,000 expense “a major setback,” as the AARP survey showed.

Anne Turley, 68, a veteran film and video editor, is getting by after some scary years of underemployment. She relies on about $1,200 in monthly Social Security benefits that she claimed early, at 62; a reverse mortgage on her house in Los Angeles; and the rent from a small studio in her backyard.

But she recently needed a new hot-water heater and about $4,000 of dental work. “Every month is ‘How do I pay this?’ ‘How can I find money for that?’” she said.

Economists attribute much of the retirement gender gap to “the motherhood penalty.” Women who raise children have fewer and lower-paid years in the work force than men or childless women, and “they never completely make up for the deficits,” said Matthew Rutledge, a research fellow at the Center for Retirement Research at Boston College.

Social Security calculates benefits based on workers’ highest-earning years, he pointed out, and mothers are apt to have some zero-earning years that bring the average down, along with years of part-time work. Social Security offsets only part of the penalty.

But much of the discrepancy in financial stability at older ages stems from a major demographic shift: Women now spend much less of their adulthoods in marriages.

That is partly because women are increasingly marrying later, or not at all. But “gray divorces” — among people over 50 — doubled between 1990 and 2010, even as divorces declined in younger cohorts, said I-Fen Lin, a sociologist at Bowling Green State University in Ohio.

the years you took off to care for an elderly parent,” Dr. Rutledge said. “It’s almost like getting an insurance policy.”

Losing that insurance takes a financial toll on women at any age, but after 50 “there’s less time to recoup,” Dr. Lin explained. “It’s hard to get back into the labor force, if you’re not working. And you don’t have as many years left to work and recover.” Moreover, older working women face both age and gender discrimination.

Cynthia Palazzo, 61, spent most of her married years raising three sons in Akron, Ohio. When she and her husband started a manufacturing company, she was paid for her work there but never opened a retirement account, because “all our money was going back into the business.”

When she divorced after nearly 30 years, Ms. Palazzo felt lucky to land a $17-an-hour job in medical billing and then, after being laid off in June, to quickly find another. With spousal support, “I’m OK now,” she said.

But she bought a condo, and “it freaks me out that I’m going to have a mortgage until I’m 80,” she said. “I basically started life over at 54.”

After gray divorce, women’s standard of living fell by 45 percent, Dr. Lin and her co-author found, while men’s decreased by just 21 percent. Repartnering, either through remarriage or cohabitation, helped divorced older women regain their financial footing, but only 22 percent of women repartnered, compared with 37 percent of men. (In Ms. Palazzo’s case: “Not going to happen.”)

Changes in Social Security eligibility and benefits could reduce some of this inequity. The benefit for a divorced spouse, for instance, is half what a widowed spouse can claim. Caregiver credits could partially compensate for years spent in child rearing or elder care.

“The basic rules were written in the 1930s,” Dr. Rutledge said. “They don’t recognize women’s increased employment. They don’t recognize that people don’t stay married for good.” Mandated retirement savings programs (Australia has one) would also help workers whose employers don’t offer them.

It’s possible to see progress in these patterns. “It’s good news that women are working and living independently, emerging as independent economic actors,” said Teresa Ghilarducci, an economist at The New School, noting that younger women were narrowing the gender gap in earnings and savings.

But many women currently approaching retirement may struggle, especially if they’re single like Ms. Hartt. She now lives frugally on a $2,500 monthly Social Security benefit. She drives a leaky 2001 Nissan she will be unable to replace when it dies. “Because I have no family and no savings, what worries me is if I were to become disabled, physically or mentally,” she said.

One piece of luck: In September 2020, she moved into a cheerful apartment in a Section 8 subsidized housing complex in New Haven, for seniors and people with disabilities. The rent comes to $670 a month, including utilities.

“I feel safe,” she said. “I’m at a kind of peace.” And because she hasn’t fully squelched her optimism, she buys a few lottery tickets each week.